What Is A Traditional British Scone?

Let’s start with just a scone. A scone is a baked good, almost always made of wheat flour, using baking powder as a leavening agent (modern). Most often, they are baked on flat trays or pans and recipes can vary greatly depending on the desire of the baker. A more traditional scone differs from teacakes, cupcakes, and other sweets that are often found in American bakeries.

The traditional British scone is usually round and similar in appearance to an American biscuit. It may be slightly sweetened and is usually served with condiments like creams and jams — specifically, clotted cream and strawberry jam. However, some prefer traditional scones — even the plain variety — just as they are.

British scones may also include raisins, currants, cherries, apricots, dates, and sometimes even have cheese. There are other varieties of “traditional” scones that are fried or baked on a stove top griddle. But, most traditional British scones are the round, leavened version that you may already be familiar with.

Our bakery, Savannah Scone Company, has five different varieties of traditional British scones. Three are currently on the menu — plain, raisin, and cheddar with chive. We have two others, popper and everything, that we rotate in occasionally.

How Should I Serve Traditional Scones?

The options are virtually endless. A plain traditional British scone offers itself as the near-perfect vessel for a variety of toppings, spreads, jellies, jams, and even compound butters and creams. It’s not uncommon to melt grated cheese on the scone or use it as bread for a sandwich. That said, if you want to do as the Queen does, start with clotted cream and strawberry jam. This tradition has stood the test of time, and there’s a delicious reason why.

What Is Clotted Cream?

Clotted cream is not as foreign as it may sound. It’s more of a process than a product; however, you can buy clotted cream already prepared. Let’s start with what it is.

Clotted cream is made from heavy cream and is a thick, white spread, with the general consistency of soft cream cheese. It is slightly sweet and can be mistaken for high-quality unsalted butter. It is sometimes referred to as Cornish Cream or Devonshire Cream. It just depends on to whom you are speaking. The devil is in the details, but if you’d like to know more, check out this article.

Many say the hardest part of making clotted cream is the long wait. It’s not a fast process. The cream must be heated for 12 hours and then cooled for another 8 hours! Once the cream is cooled, the fat (or cream) is separated from the liquid and you end up with exactly what you are looking for, that beautiful creamy goodness called clotted cream. Not a difficult process, and mostly hands-off, but it will take time and patience to succeed.

Where Do I Buy Clotted Cream?

This could be a challenge locally, depending on your access to gourmet markets. Whole Foods Market carries clotted cream but availability is unpredictable. Call before you go. It is usually found near the cheese counter and will be refrigerated. Other fine food markets, especially in larger cities, may carry clotted cream in their cheese or dairy sections. Be sure to call ahead if you plan to shop.

Amazon also carries clotted cream online — usually the same brand as Whole Foods (Devon Cream Company) — and it can be purchased in small 1 oz containers or larger 6 oz containers. You might expect to pay around $7 or more for the 6 oz container, and of course less for the 1 oz containers. Prices vary depending on seller and quality.

You will find that making clotted cream at home is far more satisfying, and economical in dollars, but the time, even though hands-off, may sway you to buy the prepared version. See our recipe below. 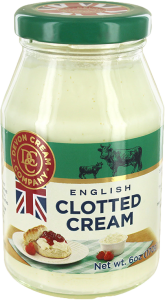 I Have Clotted Cream. What's Next?

If you have clotted cream, you’ve jumped over the highest hurdle. The rest is just fun and using your imagination. Traditionally, strawberry jam would be on the menu with scones and clotted cream. However, many choose other flavors of jam, even spicy versions. Fresh fruit preserves also make an excellent companion to clotted cream.

And guess what? Clotted cream is not necessary. If you find a jelly or jam that you love, that may be enough. Even sweet and savory butters make a great accoutrement. Whatever your tastebuds tell you, follow them. Traditional British scones are a great vessel for your favorite flavor add-ons.

As indicated earlier, perfect clotted cream is not difficult, just time consuming. But, it’s so worth the wait. You will want to start the process 3 days before you need it, or plan to serve it. While it sounds like a long time, most of it can be done while you’re snoozing.

This recipe should yield about a cup of cream, which is about 16 servings.

We enjoy our gourmet scones as much as our customers enjoy them — sweet and savory. Sometimes we just like to step back to the basics. There really isn’t anything more basic and satisfying than a traditional British scone with clotted cream, strawberry jam, and a cup of tea.

There’s a reason the tradition has lasted centuries, even if we’ve gotten a little more sophisticated in how we prepare the end result. It’s a staple for the Queen and a staple in our bakery. Want to order some today? Check out our menu and you can order them right online.

Get exclusive promotions and bakery updates. No spam. All fun!